I am not dying;
I am entering life.

St Therese of Lisieux
Sickness, suffering and death are fundamental experiences of human life. At some point, they will affect each one of us. The death of people near and dear to us can be an extremely difficult and confusing experience. As Catholics, we are encouraged by hope in the eternal life offered to us by Christ Jesus. Through faith, we believe that, in death, “life is changed, not ended” (Preface of the Dead, Funeral Mass).
The funeral rites of the Catholic Church – the Vigil, Funeral, and Rite of Committal – serve two main purposes. First and most important, they are opportunities for us to pray for our deceased loved ones. We believe that eternal life is a gift of love, rather than a right, It is crucial, therefore, that we gather to ask our Heavenly Father to welcome our deceased loved ones into His eternal, loving embrace. The other purpose of the funeral rites is to support us as we mourn. The Church’s funeral liturgies employ a rich language and symbolism, chiseled out over centuries of human experience, to comfort the grief-stricken where ordinary words fail.

Knowing what to do next after the death of a loved one can greatly ease the burden of loss. The best first step is to contact the Parish Priest or Parish Office to arrange a Funeral Planning Meeting with a priest and to book the church. Our staff understand that this is a difficult time of transition and will do their best to make the planning process as simple as possible. You will also need to engage a Funeral Director. We will work together with the Director to provide a prayerful funeral for your loved one.

There are three main funeral rites available following the death of a member of the Catholic Church. You may choose from among these options:

Vigil for the Deceased

The night before the funeral, family and friends may come together for a “Vigil”. It is customary to pray a Rosary at the Vigil for the Deceased, but there are other options available. The Vigil may be held in the Parish Church or at a Funeral Parlour. It may be possible to arrange for the body of the deceased to be viewed during the Vigil.

In the Catholic Church, you may choose between two types of ‘funeral service’. It is most common for the funeral to be a Requiem (Funeral) Mass. The Mass is the greatest prayer of the Church because it makes present Christ’s own death and resurrection, by which we are able to access eternal life, and so is the most common form of Catholic funeral. It is also possible to have a Funeral Service, which includes readings from Sacred Scripture but does not include the Consecration or Holy Communion. This form of funeral may be appropriate if many people attending the funeral are unfamiliar with the Church’s liturgy. In preparing the Requiem Mass or Funeral Service with the priest, you will be able to select from a variety of readings from Sacred Scripture, prayers and hymns that reflect the Catholic understanding of death and eternal life.

The final rite of the funeral process is the Rite of Committal. This takes place at the grave, tomb or crematorium, where the priest leads a series of prayers and blesses the place of burial or internment. If cremation occurs privately, the priest may lead the prayers of Committal at the hearse before it leaves the church. 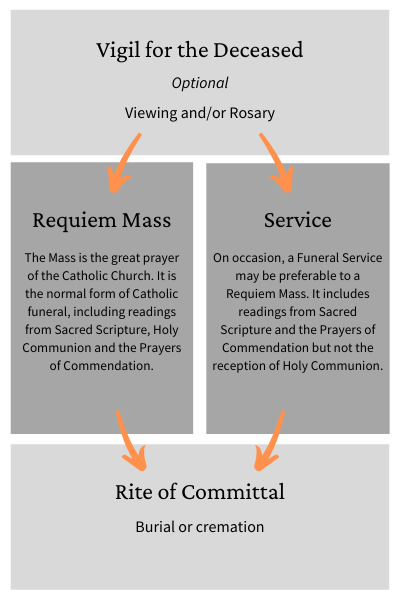 Catholic funerals, whether they take the form of the Requiem Mass or Funeral Service, are prayers of both the individual deceased and their family, as well as the whole Church. Therefore, the structure and form of Catholic funerals follow guidelines (norms) stipulated by the Pope and bishops. These guidelines are designed to support the mourners but also to ensure that the funeral is a prayerful act of the whole Church. The guidelines below will ensure that the funeral you are preparing will conform to the norms of the Church.

Step Three | Select the Readings and Prayers of the Faithful

Catholic funerals – whether a Requiem Mass or Service – always include readings from Sacred Scripture. Scripture is one of the principal ways God continues to speak to us. At the funeral, in particular, God speaks words of encouragement, consolation and love into our grief and loss. The Funeral Mass and Service include a First Reading, Responsorial Psalm, Second Reading (optional at Mass, not required at Service), Gospel Acclamation and Gospel. In addition, the Mass or Service will feature Prayers of the Faithful which are a series of short prayers for the deceased and their family. We provide the following compilations of Scripture readings and Prayers of the Faithful from which you can make selections:

Select one of the listed readings.

Select one of the listed psalms.

You may select one of the listed readings.

Select one of the listed acclamations.

Select one of the listed readings.

6. Prayers of the Faithful

Select one set of prayers.

Music has an important place in Catholic funerals. “He who sings,” reflected St Augustine, “prays twice.” Music in Catholic liturgies helps communicate the deep spiritual realities occurring and support our mourning. Thus, music that features in Catholic funerals must be “sacred,” that is, composed specifically for use in the Church’s liturgical worship of God. While this means certain popular styles of music are not be appropriate, there is nevertheless a great variety of beautiful and familiar music that may be chosen. Secular or pop music may be played at the cemetery after the burial has concluded and at the wake. Some priests may also approve the use of secular or pop music during the audiovisual reflection.

In choosing the music for a funeral, it is important to consult with the priest celebrant who must approve any music selected. He can guide you through your choices and explain unfamiliar aspects. You may choose up to four hymns (for the Entrance, Offertory, Communion and Recession), a sung Responsorial Psalm and Gospel Acclamation, the Mass Setting (Holy Holy, Memorial Acclamation and Lamb of God), as well as special pieces from the tradition of the Church like the Ave Maria. Music at funerals may be either live or recorded. Your priest or funeral director will be able to recommend musicians.

Traditional Hymns
Abide with me
Amazing Grace
Be thou my vision
Faith of our fathers
I heard the voice of Jesus say
Lord of all hopefulness
Lead, kindly light
Lord of creation
Now thank we all our God
O God, beyond all praising
O Lord, you died that all might live
Sing with all the saints in glory

Contemporary Hymns
Be not afraid
As gentle as silence
A trusting psalm
Christ be our light
Here I am, Lord
Strong and constant

Traditional Hymns
An upper room
O breathe on me, O breath of God
The king of love my shepherd is
When human voices cannot sing​

Contemporary Hymns
As gentle as silence
A trusting psalm
On eagle’s wings
Gift of finest wheat
I have loved you
Isaiah 49
One bread, one body
The beatitudes
Jesus, remember me

Traditional Hymns
Be still my soul
Jesus, my Lord, my God, my all
Nearer my God to thee
O bread of heaven
O breathe on me, O breath of God
Soul of my Saviour
Sweet Sacrament Divine
The Lord’s my shepherd (Crimond)

Contemporary Hymns
I am the bread of life
Make me a channel of your peace
One bread, one body
The Lord is my shepherd (Boniwell)

Traditional Hymns
Abide with me
Go silent friend
Hail Queen of Heaven
Immaculate Mary
Lead, kindly light
Nearer, my God, to thee
Now thank we all our God
O God beyond all praising
O Lord, you died that all might live
Sing with all the saints in glory
The day thou gavest Lord is ended
When human voices cannot sing

​Contemporary Hymns
Christ be our light
On eagle’s wings
Farewell, we come to send you
Gentle woman

Although people commonly think of a eulogy as part of the funeral service, the Catholic Church does not envision a eulogy as being part of the Catholic funeral, since the real focus of a Catholic funeral is the suffering, death and resurrection of our Lord Jesus Christ. The funeral rites are not so much a celebration of the life of the deceased, but a prayer that the life and death of the deceased may be joined to Christ in heaven. Extended reflections on the life of the deceased are best presented at the Vigil or during refreshments following the funeral.

Even so, the Church does allow for a few words of remembrance for the pastoral good of those assembled. This is not a full eulogy, but a brief remembrance (5 minutes or 500 words) of the life of the deceased, preferably by one person. The Words of Remembrance should occur first, with the Requiem Mass following. The priest may require you to submit the Words of Remembrance to him prior to the funeral for his approval.

It has also become increasingly common for families to prepare an audiovisual reflection on the life of the deceased. As with eulogies, the Church does not envision such reflections being part of a Catholic funeral. If they are done at all, it is at the celebrant’s discretion, and ideally they should be presented at the Vigil, before the funeral begins, or during refreshments after the funeral. The audiovisual reflection should go for no longer than one piece of music (approx. 5 minutes).

You may choose to provide booklets for the funeral of your deceased loved one as a means to helping those attending enter more deeply into the funeral liturgy. Booklets can be particularly useful if some of your guests are unfamiliar with Catholic worship. Before printing the booklet, send a final draft to the priest for his proofing. He knows the structure of the funeral well and will make sure your booklet is accurate.

Our parish follows the guidelines of the Archdiocese of Melbourne and suggests a donation be made to the priest celebrant and a donation be made to the particular Church where the funeral occurs. Those amounts are listed below. For further details about the recommended donation amounts, or for any queries or concerns you may have about providing a donation, please do not hesitate to contact the Parish Office or the priest celebrant. Your funeral director will also be able to guide you in this area.